I knew Susannah Fox in my life before.  I knew Susannah as a really nice Mom who would shop for her children’s toys without an edge of hurry or impatience.  I knew her as a woman long of limb and filled with sunshine. I would see her walk within my store with a sun hat on her head and a smile upon her face.  I would sell her toys, and she would buy them with gracious kindness and then depart.
That was my idea of Susannah Fox.  I did not know her name.  I did not know her job.  I only knew that she was kind and was a good mother.
On May 27th 2009, I would meet Susannah again.  I would meet her in a small health 2.0-group meeting that was my diving board into the world of patient advocacy.  She would talk of pie charts and graphs.  She would list statistic after statistic based upon her research at Pew as it applied to patient populations.  She would take all those individual stories and combine them and compress them into the statistics or “hard” data.
As the months past, I grew to know more about this new Susannah.  I would watch her choose her words carefully.  I would watch a woman who said important things always supported by the facts.  I would see a powerful woman who would often step back into the shadows, like a fair witness or an impartial observer.  She did not advocate, she only told the truth. 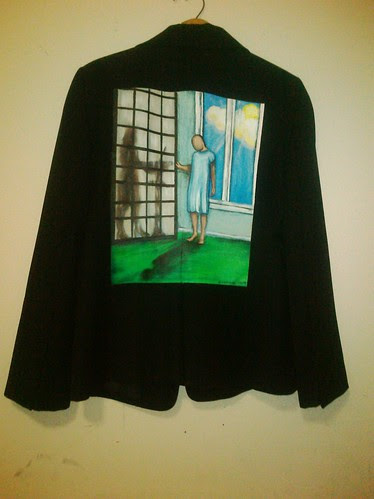 This is Susannah’s Jacket: Data Mote.  It is as serene and concise as the data she presents.  There is no mess or unnecessary details in this picture.  It is all angles and planes.  It is all shadow and light. 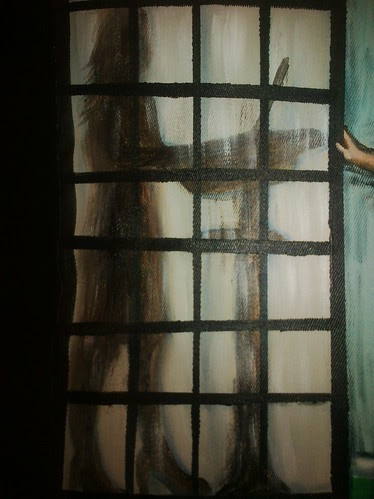 In this painting we can see the silhouette of Susannah behind a Japanese Screen.  She is presenting a speech.  She is telling the world the results of the newest Pew research as it applies to health.  She is doing it in shadow.  The data itself gets the spot light.  Susannah is just the vessel from whence the data pours. 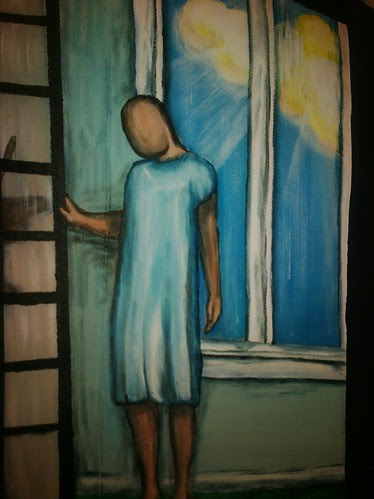 On the right side of the painting a human figure stands.  This is the data mote.  This is the faceless patient.  All unique identifiers have been removed.  She/he/it has been scrubbed.  This is clean data.  But this creature seems rather sad as it holds onto the screen that shields Susannah from view.   I do not think it shall peek though, as its head is lowered in submission. 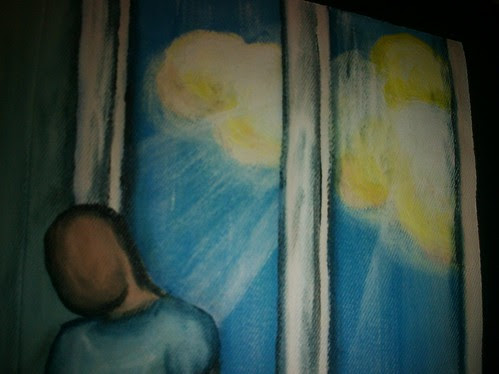 Behind this figure is a window.  In that window, shines beams of sunlight through a cloud.  This is cloud technology and social media and it is changing things.  This cloud with its bright shinning sun is changing the data space.  Our data mote now has a long shadow.  Perhaps that shadow will tell us more about this creature than we would ever have known before.
I love to think of data.  I love to paint what data means.  But sometimes the way we collect it and scrub it makes me sad.
When I painted Apples to Apples last year, I looked at quite a few data sets.  I was saddened to see areas where data could not be reported because the population that had the disease or injury was so small as to be identifiable by a hospital data set.  This applies especially to rare disease.  And I thought of Fred.  Kidney cancer is considered a rare type of cancer.  Was Fred’s clinical outcome scrubbed, because to use it would have identified him?  And then I wondered had anyone thought to ask him his wishes?  Did he want to be included regardless of possible identification, if it would save lives?
I went to a Health 2.0 Meet Up in Bethesda not long ago where I asked about data donation.  Can you imagine going to the DMV to renew your ID or your Drivers license and the staff would ask you two questions?  Of course the standard, “Would you like to be an organ donor in the event of your death?”  But what if that was followed by, “Would you like to release the content of your EMR/PHR for the purpose scientific study?” 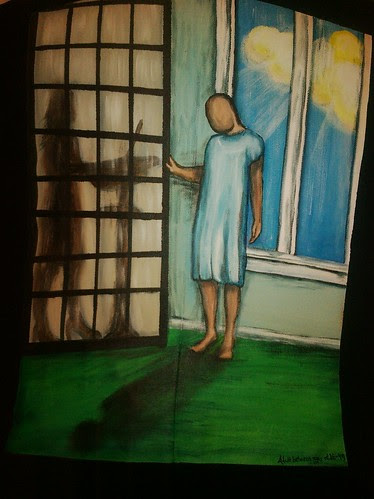 Can you imagine a world where HIPPA was used in a different way?  I sign a HIPPA release.  I give permission to share my information.  Some folks phrase this as “waiving my rights.”  I disagree.  I am using my right to share data.
I wonder how much our appreciation for data would change, if weren’t quite so clean?  Humans are messy.  Our lives and loves are messy.  Not everything is black and white within medicine.  To make a place for the patient story in the world of HIT, sometimes we have to use names.  Sometimes we have to make personal.
I think Susannah does her best to make data sets personal, given the limitations within the current form.  I am glad I got to paint this jacket for her and to sign it as an “Adult between the ages of 18-49.” 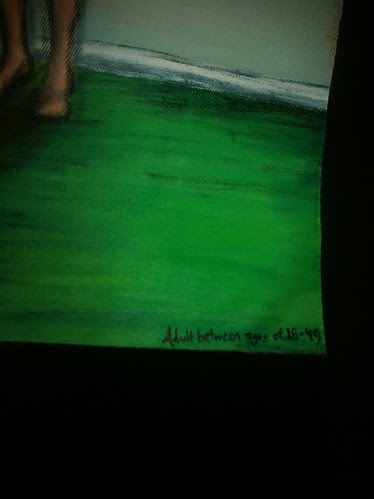 Posted by Regina Holliday at 8:59 PM