The Many Hats of Howard Liebers

Today I had a great phone call with a health care social media friend I met on Twitter.  He asked me a few questions about my work.  I think he was trying to make sense of my wild and varied tweets and the business model behind them.  I talked about my patient speaking, my painting and the Walking Gallery.  I mentioned my blog and the amazing power of twitter to spread an advocacy message.   I spoke of my 8 years teaching art.  My 16 years working retail.  I mentioned my work as a den leader in Cub Scouts.  I spoke about my involvement with Social Justice Camp DC and the workshops and rummage sales I organize to help the homeless.  And I think I said all of this without pausing for a breath.
There was a moment of silence on the line.  “Okay, I get it,” he said.  “You are trying to save the world.  You are a true believer.”  I chortled with laughter and said, “Yep, that is me a True believer with a capital T.”
After I was neatly compartmentalized within his world-view, we continued the call.  I think he might join the Gallery.    It was a great call and all of his questions made me think of someone else I know: Howard Liebers.
I once asked Howard a very similar type of question.  What did Howard do?  Or perhaps the better question would be: What doesn’t Howard do?
I met Howard on Twitter after he followed me on June 24th, 2010.  He had heard of my work from a friend of his who heard me speak at The National Partnership for Women and Children.  Howard was organizing an art benefit in the fall and wondered if I could donate a piece of art.   I said sure, but warned him he would have to pick it up.
On September 5, 2010 Howard came over to the apartment.  That day I learned about the many hats of Howard Liebers. 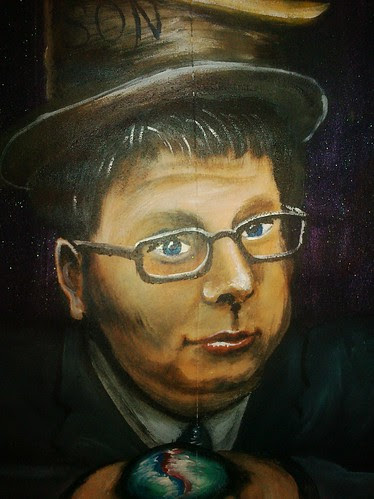 Howard came over on a busy day. That had to push my son around in a stroller while posting signs throughout the neighborhood about an upcoming Rummage sale to fund the homeless shelter and a Cub Scout membership drive.  I immediately put him to work helping to hang the signs.  He was rather stressed by the haphazard way I applied the tape.   He made some comment about the way the signs were slightly crooked with tape off center, would cause the reader concern about the mental state of the sign poster.
I laughed and told him I believed in truth in advertising.
So walked around in the late summer heat of DC, and spoke of health and art and advocacy.
I learned that Howard started his career with an AmeriCorps program called Community HealthCorps.  His full time job is working for DC Primary Care Association (DCPCA) on policy for community health centers throughout the District, and on implementation of aspects HITECH and health reform.
I learned that Howard started his advocacy because of a friend’s rare disease: non-Hodgkin’s Lymphoma.  Howard’s friend died before the age of 25.  As a result of this and due the growing realization that many people have no time left to wait for change, Howard founded MarbleRoad: a non-profit, incorporated in Washington, DC in 2010.  501(c)(3) status is pending. The mission of MarbleRoad is to connect people who have complex illnesses with the resources they need to help them improve their lives.  That day Howard gave both my sons bags of marbles to remind us of Marble Road.
Howard explains the symbolism for his Marbles: “The “Marble” in MarbleRoad also represents childhood; marbles we all used to play with. Seventy-five percent of rare diseases affect children, so some 22.5 million children need our help. And marbles, like rocks or stones, when cast into a body of water make ripples—often a symbol for change. The “Road” in MarbleRoad refers to the path towards better health—we hope to provide support services to help people along the journey towards wellness.”
Howard is also involved with NORD “The National Organization for Rare Disorders (NORD), a 501(c)(3) organization, is a unique federation of voluntary health organizations dedicated to helping people with rare "orphan" diseases and assisting the organizations that serve them. NORD is committed to the identification, treatment, and cure of rare disorders through programs of education, advocacy, research, and service.” (As defined by their website) And after we spoke of these things I started talking with Howard about Jack Klugman from Quincy, ME and the actor's involvement in passing the Orphan Drug Act.  I was so glad to hear that Howard was aware of that back-story.
Finally Howard led the conversation back to the reason he was here.  He was inspired by organizations such as The Society for the Arts in Healthcare.  Their mission to advance the arts within health care, fit in so well with his vision of the potential of MarbleRoad.   Hence, he was doing an art auction to help fund his charity. 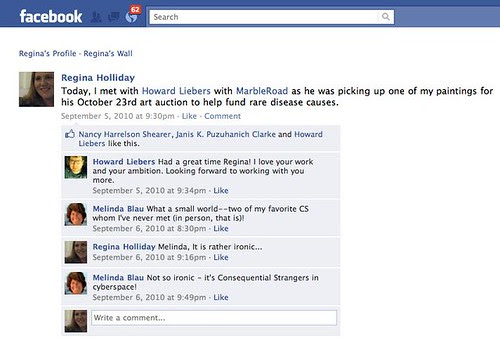 I went to Howard’s Launch Party and Art Auction on October 23rd.  In order to attend I had to miss the Silver Spring Zombie Walk.  Sadly, you can’t be in two places at one time.  Well, you can if you are a zombie, but it gets rather messy… (And if you think there is no room for a zombie reference in healthcare, you might want to check out the recent projects at the CDC.)
Anyway, it was a fun evening. It wasn’t hugely attended but there was an amazing spirit of giving in the air.  And that night I saw the final two hats of Howard Liebers prominently displayed.  Howard is a good friend.  He has friends throughout the country who love and support him, and he does the same for them.  And Howard is good son.  His eyes shone with pride as he introduced his family to his wide world of advocacy.  He sparkled as walked through the crowd and brought us all together. 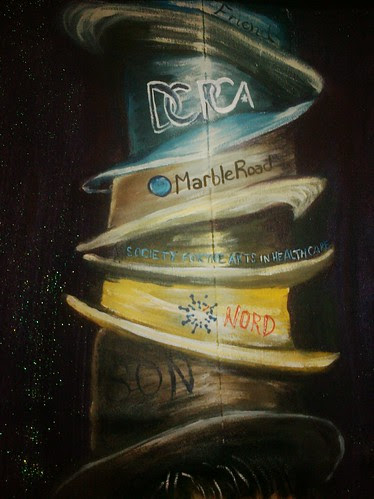 So that is the tale of the Many Hats of Howard Liebers and he is a member of The Walking Gallery.  And he is the only member of the Gallery with glitter on his jacket, because Howard is like his marbles.  He is filled with inner flecks of brilliance. 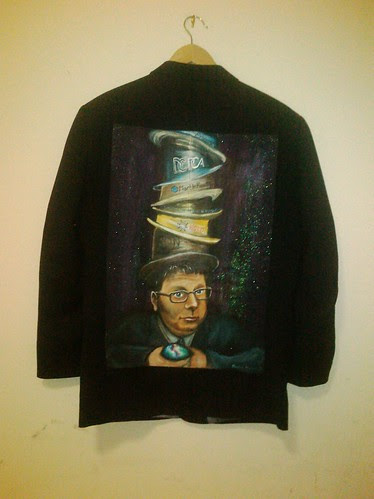 Howard sparkles with life and he is a True believer that we can work together and save the world.
One marble at a time.
Posted by Regina Holliday at 7:11 AM