It's a Spiral, Not a Bulls-eye: Liz Scherer's Jacket 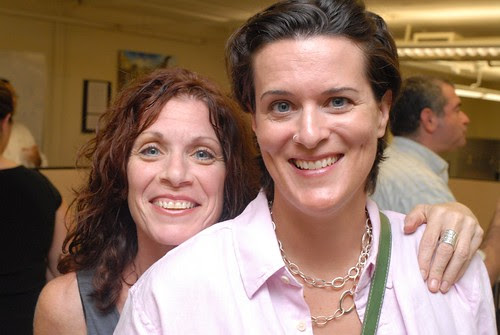 I wake up most mornings to @lizscherer’s tweets.  In the early morning every weekday I find this fiery re-head faithfully tweeting.  She describes herself as a “Flasher, interactive health wordsmith, journo/reporter, health 2.0'er, women's health advocate former N'Yorker gone DC, reveler, rebel.”  More often than not, I find Liz Scherer talking about women’s health.  She posts some wonderfully controversial articles.  I was so glad when she agreed to be part of the gallery because I knew she could wear an arresting visual image filled with controversy.  And I am so glad we had a chance to talk on the phone and design that visual together.
This is the jacket I painted for Liz: “It is a Spiral, not a Bulls-eye.“ 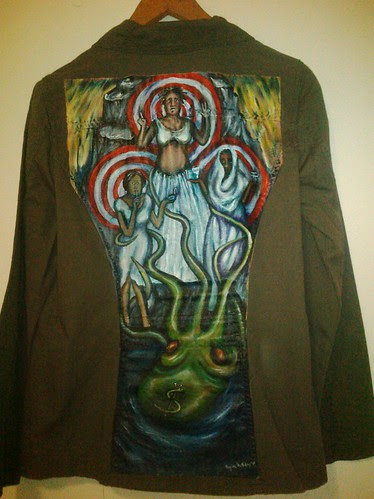 This jacket is very much about a woman’s right to healthy medical choices and the current challenges she faces in attaining the right to choose her path.  I have often felt during this past year that women’s health has been placed before bull-eye and a lot of folks are having fun using women for target practice.  In fact, I get very frustrated when I see a bull-eye used in a health provider power point set. 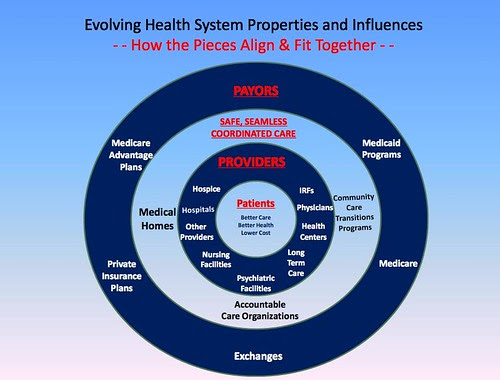 Just a few weeks ago I was honored to take part in a Safety Leaders/TMIT High Performer Webinar called “Engaging, Activating, and Partnering with Suppliers as Performance Partners” on May 19th 2011.  In that webinar Paul E. McGann, MD CMS Deputy Chief Medical Officer Centers for Medicare & Medicaid Services (CMS) presented a newly created Patient at the Center Info graphic.  As the info graphic assembled in a step-by-step process during the power-point presentation, I became increasingly concerned that this was the wrong visual for the concept of patient-centered care.  The patient wasn’t being centered; the patient was surrounded.  I soon realized that my frustration with such a visual symbol was two-fold.  First, I felt the bulls-eye represented attack.  And secondly, it represented doing something to patients, not with them.
They should have used a spiral.
A spiral is the path; it is the journey.  I walk it with you, and do not do it to you.  It represents life.  It represents women.  In this painting the spiral is a triskelion.  A triskelion is a symbol with three interlocked spirals.  This symbol has been used through the ages to represent the stages of a woman’s life and the three trimesters of pregnancy.
Within this painting we a have a triskelion symbol upon a sacrificial rock.  The spirals are so obscured by the bodies of the sacrificial offering, that it seems like the swirls have become bulls-eyes. 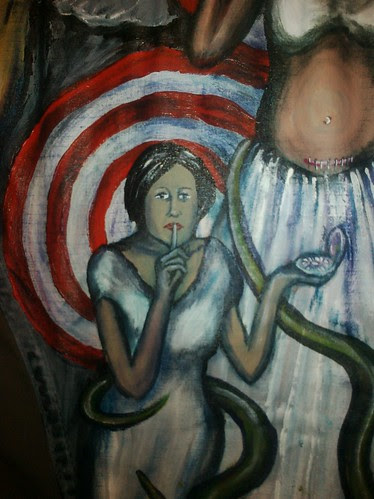 To the left side a maiden stands.  She tells the viewer to be quiet as presses one finger to her lips while the other hand clasps her birth control pills.  She is worried her choices will be taken from her. 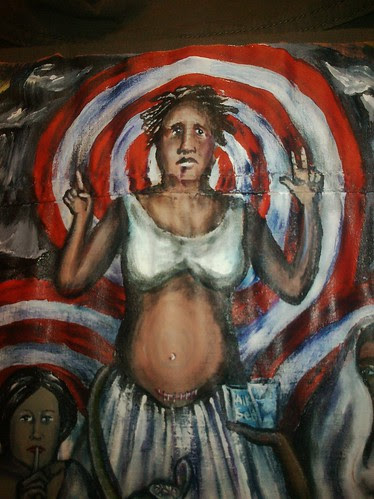 In the center stands the mother.  She holds up one finger with her right hand and three fingers with her left.  Her belly is distended with pregnancy, yet she has a freshly stapled cesarean section incision.  She represents the very scary ratio of how many women are currently having their children by cesarean in this country: One in three. 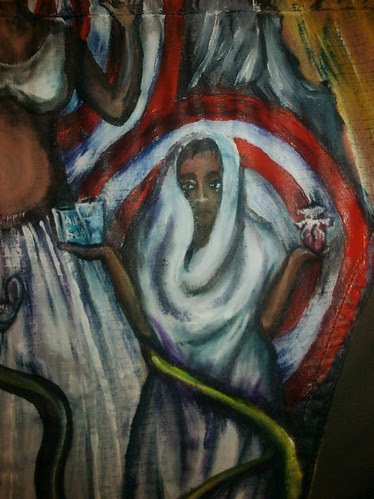 To the far right is the crone.  She seems so young within her robe. Surely she is not a crone?  Our culture tends to equate the crone with the ancient and the haggard.  When in actuality the crone is the post-menopausal woman, with her own drives desires and medical concerns.  Here she holds a human heart in one hand and alka seltzer in the other.  She represents all the women who have heart attacks in this country and are sent home to treat their “indigestion.” 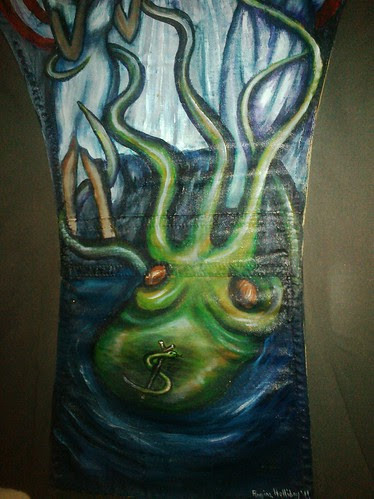 In front and beneath the female sacrifice is a cthulu-style beast.  Its tendrils wrap around the women as it prepares to pull them down into the deep.  Upon it’s head it a symbol.  It is the rod of Asclepius.  But in this representation, the snake is slowly uncoiling and the combination of rod and snake assumes the form of a symbol for the holy dollar.
I am honored to paint this jacket for Liz.  She is so powerful and wise.  She writes of the daily struggles of all the “crones” among us.  It is so important that she is out there representing all of us with her powerful voice.  And I am so glad we are walking the spiral together. 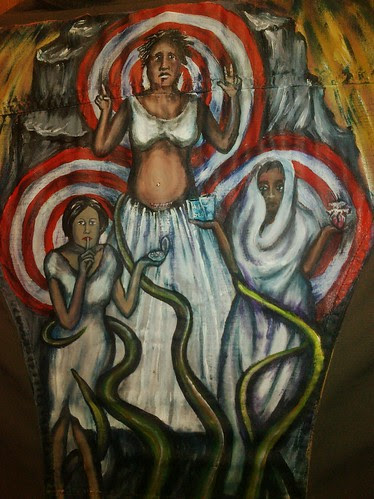 Posted by Regina Holliday at 5:53 AM