Yesterday, I had the pleasure of attending several sessions at the Aligning
Forces for Quality: National Meeting in Washington, DC.   Upon arriving at The Grand Hyatt, I was greeted with the utmost welcome by Alicia Aebersold and guided to a session hosted by Mike Painter, or as I have known him on twitter for these past few years @paintMD.
The session was entitled Stakeholder Perspectives on Addressing Health Care Costs.  I set up my easel while Mike introduced the panel of Speakers: Andrew Webber (National Business Group on Health-Moderator), Kathy Hutcheson (South Central Pennsylvania Alliance), Vince Kerr (United Health Care), Karthik Shyam (AIR), and Barbara Tobias (Cincinnati Alliance).  As I was assembling my supplies the lovely Kalpana Ramiah, DrPH, MPH, Principle Project Specialist for Health Policy and research at the American Institutes for Research offered to help me in any way and proceeding to get me water for my brushes.
And so I began painting this piece “Cost Benefit Analysis.” 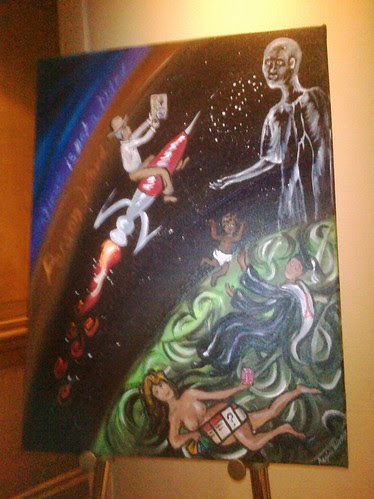 I started painting the lovely swooshes of color that Aligning Forces used on many of its session handouts.  I listened to Vince Kerr take us to a fictional other world where diseases affecting all newborns and valedictorians were overcome by this society’s concentrated effort.  And then he brought us back to our world with the cold fact that all income increases in the past decades were wiped out by health care costs.
So, I painted deep space and the constellation that was most apparent is symbolic of the dollar sign.  In the extreme right foreground of the painting a green planet revolves with its surface deeply scored by such monetary symbols.  Here our valedictorian rests and looks upon the viewer.  He is unwell, yet graduating. And if not for health care reform his insurance coverage would lapse upon re-entry into a jobless economy.  The valedictorian throws a babe in the air in that timeless favorite game of childhood.  The baby smiles at the viewer, blissfully unaware that without a change of course in the arc of spending, there will be no healthcare dollars left for his adult life. 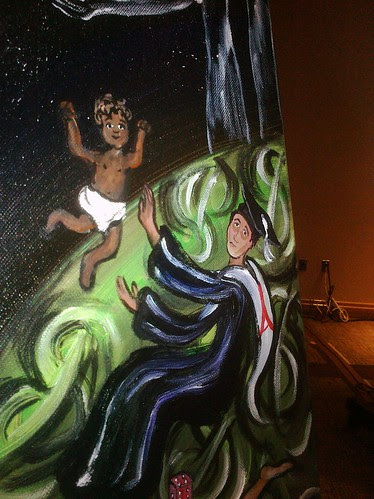 I then painted that arc as a rocket spiraling ever higher.  The conversation on the panel then turned to patients and their part in this mess.  The lack of transparency in pricing and use of EOB forms that read more like hieroglyphs than billing documents was remarked upon.  Patients could compare and choose a dishwasher by quality and price but not their healthcare choices.  Vince continued on, listing inappropriate procedures and wrongly prescribed drugs that waste money and unfortunately lives as well.
Patient awareness of true cost was considered a key element in creating future payment models.  And that means more than just being invited to the table, that means patients must know the plan in its entirety.  Otherwise, we are only a pawns within a larger game.  At this point the health care spending rocket gained a rider.  An old cowboy sits upon the rocket straddling it like a rodeo bull as he tries to understand a medical billing record with the aid of a magnifying glass.  He fails in the attempt as the rocket spirals ever onward.  Some of you might recognize this homage to another piece of work. 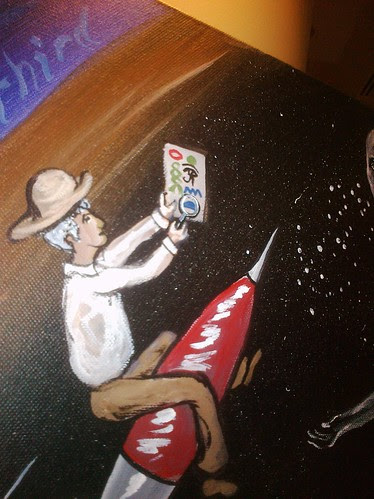 Dr. Strangelove anyone?
The image of Major Kong riding a nuclear bomb to his own destruction is rather iconic in film circles.  Do you know character actor played Slim Pickens that role?  Further, did you also know that the director Stanly Kubrick only let Slim see his part of the script and Slim played the role “straight” not knowing he was in a comedy?  When Slim arrived in England to film in 1962 he was wearing a cowboy hat and western clothes and the cast and crew marveled that he had come in costume.
They had no idea that Slim wore his western cloths as regular attire.
Slim’s character is a determined patriot who fulfills his mission regardless of many system errors and dies in the attempt, with no knowledge that he has set off a series of events that will insure a complete destruction of the world.
I could not think of no better representation of patients in the current world of healthcare.  We are often the straight players in this farce, given only enough information to launch the rocket but not to steer its course.
Finally, I heard a phase that I have come to revile.  “Patients need more skin in the game.”  So I painted a woman completely bare.  Her body has become a part of a Monopoly game as she prepares to roll the die and land on chance.  In one hand she holds the die in the other the play money from the Monopoly game.   You know the gold color bills, greens, the blues, the ones you hoard trying to win the game.  She will pay them out having no idea how much she will have to spend or how effective her treatment is within a national aggregate. 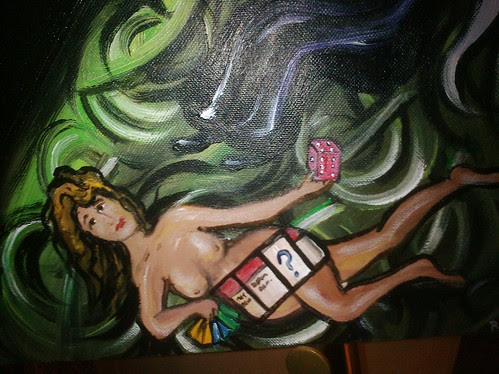 How could she possibly have more skin in the game?  She is the one laid bare upon the examination table.
After the Health Care Cost Session, I saw the luncheon plenary by ePatient Dave. DeBronkart.  It was entitled “Let Patients Help: Engaging the Ultimate Stakeholder.  As usual Dave was amazing.  His speech took the audience on a rollercoaster ride of information, facts and figures and the emotional reality of the patient experience.   I quoted his phrase within the painting: “Patient is not a third person word.” 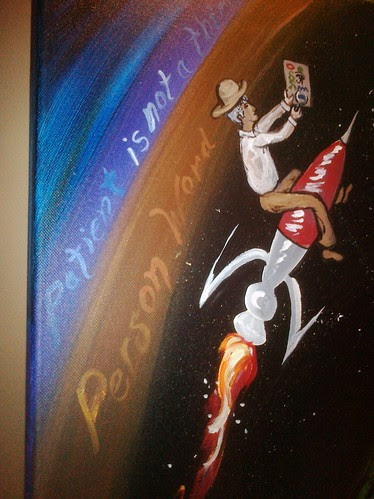 And while listening to his tale I painted one last constellation in the sky. This was the patient.  He stands with his hospital gown gaping open, his face concerned as he offers you his hand. 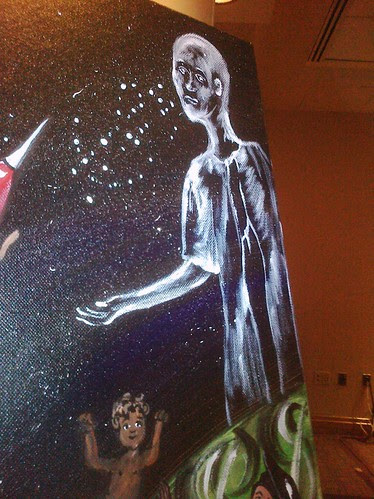 He has nothing left.  His hair is gone, his clothes removed.  Yet still he offers all he has to make healthcare better.
All any of us have in the end, ourselves alone.
Posted by Regina Holliday at 11:53 PM