If you know me personally, you might have noticed I do not do things by half.  It does not matter if I am working with children creating art, selling toys in a toy store or making costumes for Halloween.  I brought this same intensity to my pursuit of medical advocacy.  When Fred first told me to “go after them.”  He knew exactly what he was asking for.  He called it “pulling a Regina.”  He knew I would use every tool within my reach to attain this goal, and I would never stop.
But it is hard to maintain this intensity in all aspects of life.  Some things must be let go in the pursuit.  This year is the first year in almost a decade that I am not a pre-school teacher.  And this year is the first year in his life my younger son Isaac wore a purchased costume for Halloween.
Halloween was quite the challenge this year due to conflicts within my speaking schedule.  A little over a month ago Chip Taylor, MD Medical Director, Oregon Health Information Technology Extension Center asked me to speak in Oregon on November 1st at the OCHIN Learning Forum.  I looked at my calendar and saw November 1st was available, and told him yes.  I would love to speak about patient centered care and patient engagement through access to the Electronic Health Record.
I forgot that meant I would be traveling on October 31st.  Halloween.
Two weeks preceding the trip to OCHIN I attended Isaac’s Fall Fair at his elementary school.  There he fell in love with a Green Lantern costume donated by another child.  It was Green Lantern in the classic comic book style.  In the past I have always made the children’s costumes.  But this year I gave in and purchased Isaac’s.  I sewed up the tears at the various seams.  Hemmed the pant legs.  I took Isaac shopping to find a Green Lantern Ring and created a new mask, as the original was long lost.  Freddie, Isaac’s older brother, still got a homemade costume of a rather obscure character named “Zero” from Code Geass.
I then spent quite a while on the phone with a lovely lady working with OCHIN to find the last flight leaving DC on October 31st.  I would get to trick or Treat with Isaac for one hour.   We walked down the avenue to tick or treat at all the local shops on Connecticut Avenue by the toy store Child’s Play.  Isaac had a blast in his Green Lantern costume.  He was very proud of the costume he picked out.   I was wearing a Hogwarts robe from 6 Halloween’s ago.

When we went into the toy store, my old boss Steven looked at our costumes in dismay and disappointment.  He said it did not look like what he expected from me on Halloween.   Isaac did not notice he was happily getting candy.  Soon after, I was on the bus with Isaac preparing to drop him off with my friend Miriam to Trick or Treat with her children.  On the bus, Isaac looked sadly down at his candy and said he would miss me tonight.
I felt so bad.
Once upon a time Regina would have wowed the crowd and her two sons with amazing handmade costumes.  And she would have a husband there to take pictures of us all.  And we would have eaten supper together and trick or treated as a family.
But Daddy died, and Mommy fights against injustice and little boys sometimes have a lonely Halloween.  If there is one thing I have learned in the world of medicine, is forget about holding tight to your plans.  I learned that lesson in March of 2009.   I learned that as we sat in rooms and waited for doctors that never came and records that were never opened.
Sometimes things do not go as planned.
So, I boarded an Airplane at 7:30pm at Regan National on October 31st still wearing my Wizard’s Robes.  I spoke the next morning before the folks at OCHIN.  My Presentation was called Trick or Treat, and I wove references to Halloween throughout the speech.
I then began to paint.  I painted in two sessions in the morning.  The painting is called: “50%.” 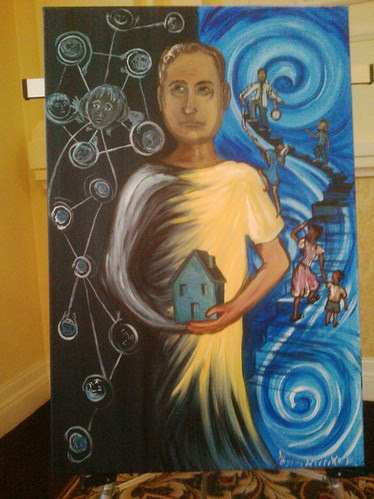 I saw the first presentation “Integrating Mental Health into Primary Care,” delivered by Tami Hoogestraat, Psy. D., M.B.A. and Demetrio Sanchez, MSW-OHSU, Richmond Mental Health Integration Team.  I was very impressed by their slides.  An early one really caught my eye with its statistic: “50% of mental health problems are missed in primary care.” 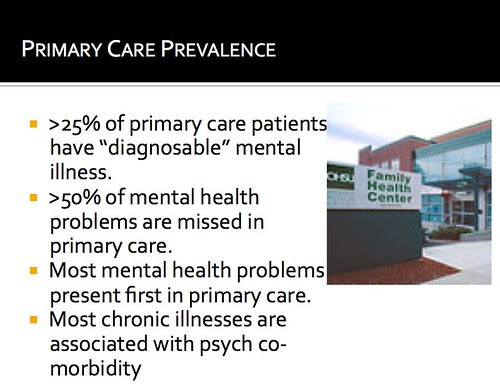 A diagram of an integrated care model soon followed that slide.  It reminded me of a spider’s web. 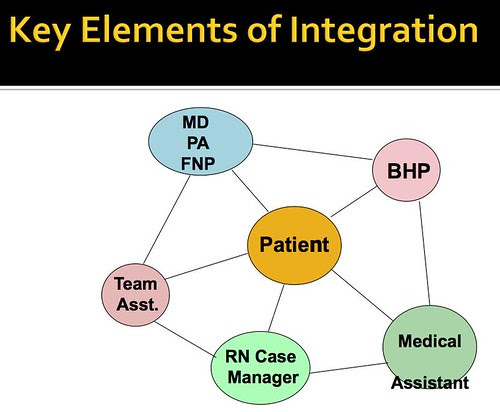 In this painting the patient is divided in half just like our statistic.   Half in darkness half in light he clutches his medical home.  The medical home is colored like and reminiscent of a Monopoly house.  It is an ideal but will not work without a supported reimbursement model. 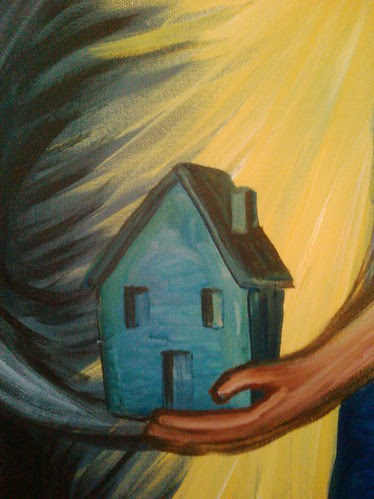 To the left of our figure the spider web diagram of integrated care places the patient in the center.   But this no comforting circle enclosing clinical text.  Here the patient looks up staring at the viewer whilst frightened.  Practitioners that are trying to care for him surround him.  I added other threads crossing the path of the diagram to the other care agents and detriments in the man’s life, be they friends, foes or family. 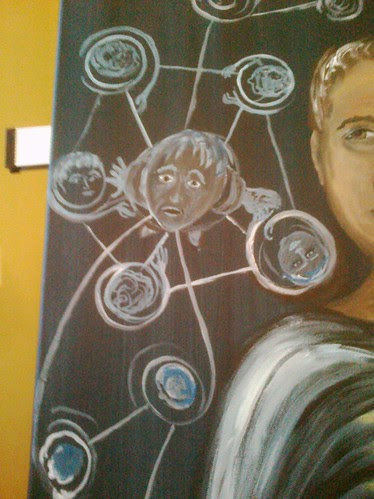 There is a hope within this patient, but it is an anxious hope.
To the right side of the painting blue swirls of energy cascade upward.  A staircase follows the upward cascade.   This part of the painting was inspired by the next session “Advanced Access Management in an FQHC.” 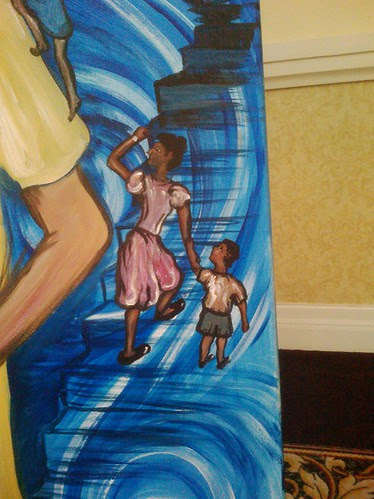 Here patients race up a stairs trying to make their appointment time.  A mother glances nervously at her watch as she hurries her child up the stairs.  A doctor waits at the top reaching out to the registered patients with one hand.  In the other he hoists a rope that ends in a watch.  A patient in an examination robe strenuously climbs the rope.  She is not scheduled but direly needs care, and the doctor is trying to fit her in, hence the term advanced access. 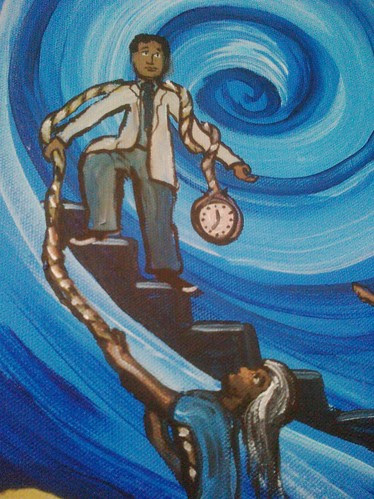 In the afternoon I attended Chip Taylor, MD and Clayton Gillett’s presentation “Case Studies in Re-designing Visit Workflow for Meaningful Use.”
It is entitled: “The Faces of Meaningful Use.” 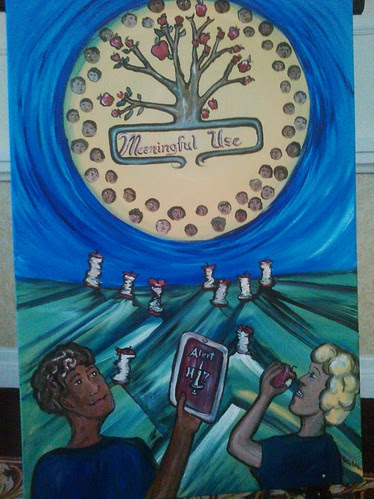 I decided to take the OCHIN logo and modify it to a Meaningful Use Sun image.  So a logo tree becomes the tree of knowledge, weighted heavily with apples.  Surrounding this tree are dots.  But these dots have become faces, just as much as data points and statistics represent real people.  These are the patients and providers creating the workflows for Meaningful Use. 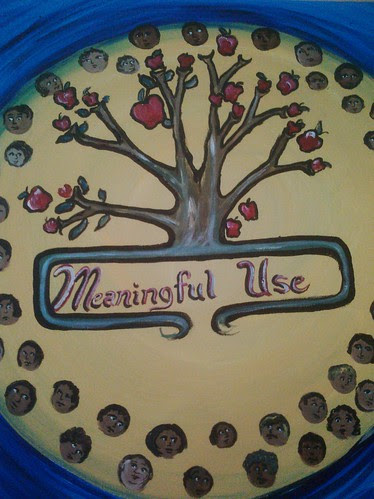 Below this meaningful sun, apple cores are placed upon a mountainous terrain consisting of stacks of pointed paper.  These are the ‘core measures” of Meaningful Use.  One patient in the foreground eats an apple and adds to the creation of a new “core” measure.
The other patient in the foreground is inspired by the last session I attended: “Immunization Registry: State of Oregon” presented by Mary Beth Kurilo, MPH, MSW.  This patient happily holds up an I-pad stating: Alert HL7.  The L within the HL7 is created by shape of a vaccination shot.  He is happy because easy access to immunization records will ease the work of each harried parent, teacher and doctor all over the state and this will be done in a standard code.
At the end of the day I presented the painting before the crowd with a short explanation.  Afterwards a few people cam up to talk to me.  One was a lovely woman in a purple blouse that criticized “50%” as being rather dark in light of all the strides made toward integrating mental health in the primary setting.  I said yes, it is a little dark, but this is the patient perspective and even though strides have been made he is still very anxious.  Next Chip Taylor thanked me for the day and said he would love hang the Meaningful Use painting at OCHIN.  He also thanked me for creating a custom speech designed just for them.  I thanked him for inviting me and I responded that I always try to create each speech as a custom tailored message of patient engagement for each audience.
And that was probably the crux of my Halloween sadness this year.  I don’t tend recycle speeches just like I don’t tend to recycle costumes.  I love to create each one custom made for the recipient.   This year I did that OCHIN, and my little guy happily wore a recycled superhero costume.  He was happy in his costume and he knows why Mommy does what she does.
Trick or Treat

View more presentations from Regina Holliday
Later that evening I sat down exhausted in the Portland airport.  My flight would not leave until 11:40, but my body felt like it was around 1:00 am.   I lay my head upon my backpack and pulled out my Wizard’s robe to wrap around me thankful that I had a recycled costume with me as snuggled down for a few moments of sleep.
Before dozing off I remembered, Today is All Saints Day.  Halloween might have been a disappointment, but for many in the Patient Safety and Patient Rights community I was doing the best possible thing on this day.  And if they were still with us I am sure they would tell me so.
Posted by Regina Holliday at 11:03 AM