The Man Behind the Camera

If you are as old as I am, you remember those special days in school: the movie days.  The days the teacher would walk to the head of the class and pull a projection screen over the outdated world map.  She would roll a squeaking metal cart to the rear of the room.  We would watch in awe and amazement as her deft fingers would unreel the spool of film and place it on the carriage.  She would turn on the film projector and each dust mote would gleam in the air.  Then she would advance the film and that wondrous noise: that pleasing repetitive fftht, fftht, fftht would fill the room.
For the next thirty minutes we would fall into the world of the documentary.
We would learn about big cats on the Savannah, or the division of a cell or the mathematics behind the construction of large buildings.  For thirty minutes the room would cease to be a slightly musty space filled with chalk dust, but instead became a theatre.  As a child, I would smile in delight on movie days, and be so thankful that the projector worked and the film did not break.
As an adult I thank all the documentarians that have created such delight in others.   I am thankful to know a handful of such amazing people.  One of those is Matthew Listiak (@MatthewListiak on Twitter) and this is Matthew’s Jacket in the Walking Gallery:  “The Whirling Dervish.” 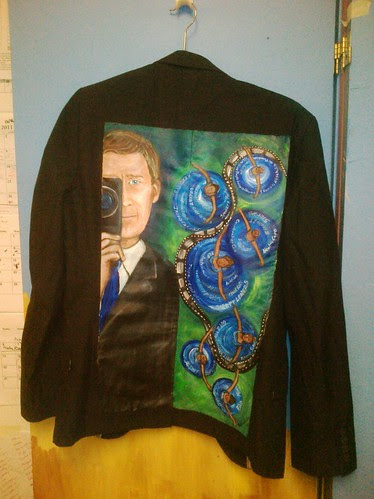 I have known Matthew for almost a year, and for much of that time he was represented by face consisting of only one eye with a shock of red hair behind a camera.  He was the quiet one; he scurried between cameras and applied make up before the last shot.  He would look at the world with a furrowed brow.  He would pick the best light or angle for a shot.  He was like many filmmakers I have met, but one thing sets Matthew apart.  Matthew not only cares about the subject of his films, he is actively helping make the world of medicine a better place.
Matthew works with TMIT (Texas Medical Institute of Technology) as a Senior Producer.  He is intimately involved in the creation of the various quality and safety videos on the SafetyLeaders.org website.  He is one member of team creating the patient speakers portal that will go live in December.  He was a producer of the documentary Chasing Zero: Winning the War on Healthcare Harm that aired on the Discovery Channel.  And is a producer of the upcoming Documentary in the series: Out of the Danger Zone: Winning the War on Healthcare Harm.
And all of these things make Matthew so very special.  For I have known filmmakers in my life, and many of them sadly shake their heads when they hear a patient’s tale of woe and sorrow.  But that expression of empathy is not followed by a call to action.  They do not funnel every bit of time or talent into a campaign to ensure cessation of harm.
But Matthew does. 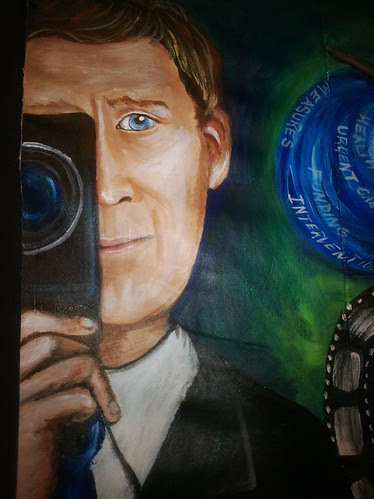 Here is Matthew.  His bright blue eye looks upon the viewer with such depth of caring.  His other eye is mechanical: the camera itself, and he is recording.  He will ensure change by the active creation of new media. 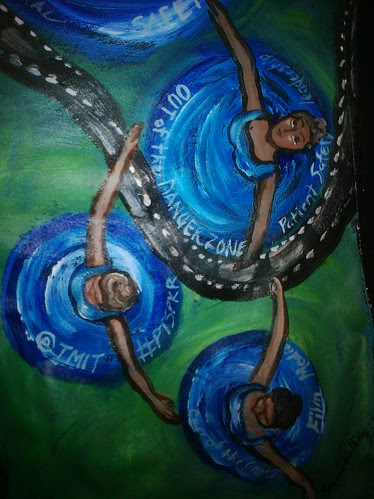 To the right of this painting are the Whirling Dervishes.  These women spin first in meditation.  As they spin faster and faster they begin to relate to the divine.  Writ upon their skirts are the topics that fill the world of patient centered care.  “125 Million people living in chronic illness, disability or functional limitations,” says one quote from the Aligning Forces for Quality Conference.   Others skirts are adorned with websites and twitter hashtags.  Some of the Dervishes look up as a small child would, some look straight ahead focused on their own internal conversation.  And they spin and spin becoming a sort of projector for the media that Mathew creates. 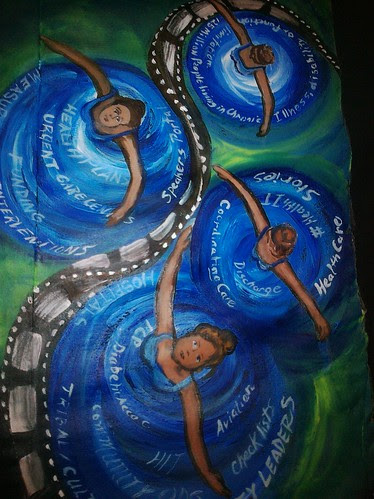 At this point I feel the fright of the child inside me.  For I see the film has twisted, and I know it soon shall break and movie day will be undone.  We will no longer learn about these amazing things if the projector breaks.  If we stay too focused on our own conversations in our own closed medical communities, if we continue to merely spin our wheels and talk in a circular fashion about patient care, we shall fail.  We must each exist as a device to propel the story forward.  And through ourselves project the light we wish to see in others.
So this is Matthews Jacket. 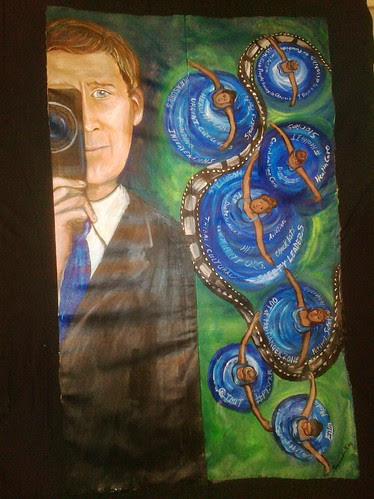 And this is the website Safetyleaders.org
It is filled with amazing content and media that Matthew has helped create.  And if you watch these films you will learn more about patient care and lives will be saved.
The projector only breaks when you fail to use these films as they were intended.
Posted by Regina Holliday at 8:49 AM