Mentors
In the spring of 1991, I was a senior year in high school.  My sister Esther and I were a very active in speech and debate.  My goal was to qualify to attend regional competition in every category of competitive speech and attend National Competition.  I very nearly reached my goal and did compete in every category prior regionals.  As a freshman and sophomore I competed in Prose and Standard Oratory, as those categories are exclusive to those years.  In the school year of 1990-1991 I competed in Original Oratory, Dramatic Interpretation, Humorous Interpretation, Domestic Extemporaneous, Foreign Extemporaneous, Monologue, Humorous Duet, Dramatic Duet and Poetry.  I also debated in the Lincoln-Douglas Style of debate.   My sister qualified as well with a lovely oratory comparing the ups and downs of life within the metaphor of a yo-yo’s path.
It was a lot of work, but I am very glad I did it.  I memorized hours of material in the attempt. I pored over newspapers and magazines to create files of support documentation for my extemporaneous speech.  I spent hours organizing data for quick access when needed.  I carried those files in heavy file boxes from tournament to tournament.
I had no idea how such preparation would help me in the years to come.
My success was somewhat amazing when one considers our family background.  Neither one of my parents had graduated high school.  We were very poor.  My parents were going through the process of divorce after years of domestic abuse.  I had no money for the multiple fine dresses one need to compete in.  Everything was set against me, but I had a special reason for succeeding.
I had a mentor.
Jeanne DeVilliers, otherwise known as “D,” was my debate coach.  She was a wonderful woman who was there for me in so many ways.  She helped me pick out amazing material to perform.  She constantly challenged me to do better.  She would even take me shopping to get the appropriate clothes.  I remember her lessons and words to this day.  There is not a speech that I perform without feeling her supporting presence.
That spring of my senior year, I qualified in regional competition and attended the Oklahoma 1991 4a State Competition in both Original Oratory and Poetry.  After many grueling rounds in both events, I won state Champion in Poetry recitation. I had performed The First Quarrel by Alfred Lord Tennyson.  It is a heart--wrenching poem about the last harsh words between a husband and wife before the husband is lost at sea.  I was honored to win the State Championship in poetry, but the greatest event was yet to come.  Regional competitions can take you to state, but National Forensic League district competition can take you to nationals.
I was so excited to attend district competition.
Many speakers would disdain the judges at regular competitions. At simple qualifying regional events judges were often regular people: bus drivers and locals that wanted to get the twenty-dollar payment for judging for the day.  Their only instructions were the rules on the top of the ballot.  They would judge for or against based on simple things like whether you were persuasive or not.  They wouldn’t notice whether you were completely correct in your citations.  They did not realize the great error of gesturing too much in poetry or moving both feet in dramatic interpretation.  Bus drivers and locals tended to focus and performance and not rules or points or citations.  I loved them.  There were no power plays and no infighting.  They often gave me ballots with the most worthwhile instruction.
At district competition, every judge was immensely qualified.  They were all coaches or prior students now pursing college degrees.   They were all very aware of the rules and following breakout sheets just like a basketball fan follows the brackets during March Madness.  I was so excited during the breakout postings as my name kept rising on the lists, until at last I was in final competition in two events.  I competed in both dramatic interpretation and original oratory.
Due to a failure of communication, I was judged down in both.
Prior to the announcement of the winners, my wonderful coach Jeanne DeVilliers took me aside.  She said, “Sweetie, I have some bad news for you.”  I looked at her in horror.  I looked at the thin translucent skin of her face, her sparse eyelashes and her carmine lips.  I really did not want to look in her understanding eyes as she told me what had happened.  I had been in two finals rounds.  Each round had three judges.  Those two sets of the three judges had not spoken to each other, but both sets had made a fatal error as far as my national competition hopes were concerned.  Both sets of very qualified judges had judged against my performance in an attempt to give more seniors the chance to attend nationals.  They had both assumed I would come in first or second in the other competition, and so accordingly, both sets of judges had judged me in third place.
I failed to qualify for Nationals.  I would not get to speak in Washington DC.  It might not seem like a very big deal.  But to me it seemed as though my world had crashed down around me.  For a very long time, this was the worst moment in my life.  I was a failure.  I would go to college in the fall, still thinking I was a failure.
I would not give another speech for the next 18 years.  I would work retail, I would teach, I would be a mother, but I would not be a speaker.  Then in 2009 Fred grew sick, and I dusted off by brushes and my speaking skills.
Once again I would find a Mentor and this mentor is named Ted Eytan.  Ted asked me to do my first speech in the world of patient advocacy. 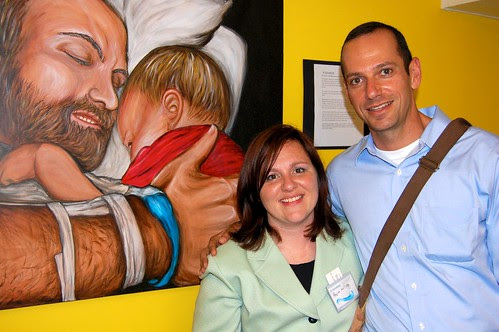 In the fall of 2009, I delivered my first speech in the Nation’s capitol.
Ted constantly challenged me to grow as a speaker and learn more about data rights, patient advocacy and myself.  For the past two and a half years I have depended on Ted’s guidance.  He has photographed my work and tweeted my speeches.
On November 1st, the Fast Forward Film Festival premiered the documentary short:

The talented Jamie Crausman, Ben Crosbie and Tessa Moran created the documentary.  It focuses on the painting “73 Cents” and my first year of patient advocacy.  I could not attend myself as I was presenting in Oregon a speech about the importance of patient access to the Electronic Medical Record.
Ted introduced the video before the crowd in Washington, DC.  I could think of no one more appropriate.  Well, it would have been nice if Mrs. Jeanne Scott nee DeVilliers could have been there too, but I am sure she was cheering us on from her home in Oklahoma.
Posted by Regina Holliday at 1:58 PM