This week Alex Albin was on my mind.  I knew I was rapidly approaching the one hundredth jacket in the Walking Gallery and I wanted that jacket to be Alex’s.  Alex had wanted to be part of the Washington, DC Gallery on June 7th, 2011 but she could not.
Then Alex planned to attend Health 2.0 in San Francisco in September, but instead she had to fly to Colorado to undergo her 17th Surgery.
Alex very much believes in compassionate and informed patient-centered care, as she is very much a patient.  So this is Alex or @msaxolotl as I have known her on Twitter.  I love her Twitter handle.  @msaxolotl.  I think it is the name for a dinosaur or some ancient flying reptile that once gracefully soared above us but now is lost in the dust of time. 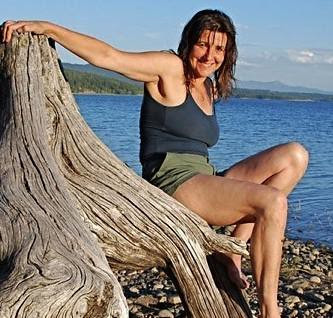 Doesn’t she look happy?  I loved her twitter picture at first sight.  I marveled at the juxtaposition of soft pliant flesh resting on curvaceous weathered wood.   Yes, I loved the picture, but I had no idea how much the old tree and Alex had in common.  For Alex has a condition that mimics “dry rot”:  avascular necrosis or osteonecrosis.
She was diagnosed with MS in 1994 after a bad kidney infection and odd neurological symptoms.  She had a paralyzed bladder and would lose her balance.  She was treated with steroids.  Eventually she began to use a wheel chair to get around and could barely hold a cup in her hand.
She was only 34 years old.
She spent the next three years trying to regain control of her body and her life and was prescribed beta Interferon at the cost of $1,500.00 per month.
Then in 1997, the bone pain started.  She saw a Neurologist and an orthopedic surgeon on the same day.  The neurologist had some good news; she did not have MS.  But her orthopedic surgeon said, “Well, you have this condition in both hips called Osteonecrosis… where the bone dies.”  This condition will plague Alex for the rest of her life.  To further add insult to injury this disease is most likely a direct result of the blast of steroids.
Alex has now completed 17 orthopedic surgeries on hips, knees, shoulder, elbow and wrists in order to save her joints.
Due to the honest and frank appraisal of a local doctor, Alex was informed she should see Dr. Steadman in Colorado.  She has had most of her surgeries there, but has trekked all over the United States to get appropriate care.
Alex is an e-patient: which she defines as engaged, electronic and empowered.  She has used every tool in her arsenal to fight this disease.  But she is a very special e-patient because she does this for us all.  She is a patient who speaks for other patients standing on the firm foundation of her patient experience.
I see her frequent tweets and questions posted on the high level threads of thought at the Society for Participatory Medicine.  And I am so very thankful that Alex is part of this movement.
So this is Alex’s Jacket: “The Sycamore Tree.” 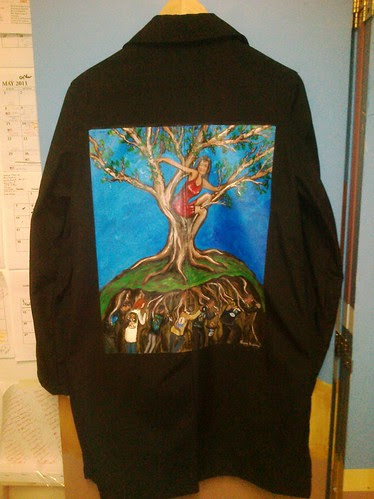 In this painting lovely Alex sits perched within the branches, a loving smile lights up her face.  She is dressed in a red little red cocktail dress, and every eye is drawn toward her face and her body.  But how that lovely body suffers, for Alex’s limbs are pinned by the tree.   At hip, shoulder and wrist living shafts of wood pierce her flesh and reach for the sky. 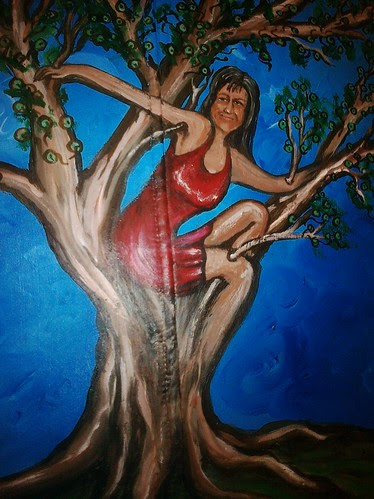 But why is she perched within a sycamore tree?
She is so perched because Thursday was a very important day for HIT and consumer engagement in Washington, DC.
I had received several invitations to register for the ONC meeting available to join by webcast November 17, 2011: ONC Grantee and Stakeholder Summit.  I was so thankful that I had the opportunity to attend the meeting in such a way.
David Blumenthal began the day with opening remarks.  Then at 9:00am Farzad Mostashari, MD, ScM, National Coordinator for Health Information Technology, Office of the National Coordinator for Health Information Technology (ONC), HHS delivered a speech.  Farzad was brilliant and I am continually amazed at how his passionate voice has grown since becoming national coordinator.  I sat riveted tweeting the speech for the entire 45 minutes.
Then at 9:45: nothing. The feed went silent as people gathered for a break.
I despaired.  If only I could be there in person.  Then I glanced up to the top of the web page and saw those magical words:  “All Thursday sessions are open to the public.”   I changed out of my painting cloths and into conference attire and headed downtown.
As I traveled I sang under my breath a song from long ago days of Sunday school.
“Zacchaeus was a wee little man
And a wee little man was he
He climbed up in a sycamore tree
For the Lord he wanted to see
And as the Savior passed that way
He looked up in that tree
And He said, “Zacchaeus, you come down from there!
For I’m going to your house today
For I’m going to your house to stay.”
I sang because I was feeling rather like Zacchaeus, unable to get a clear view and willing to make a spectacle of myself just to be near the amazing people who spoke with such passion about medical records and patient access.  And as I sang I thought of Alex far away, unable to attend event after event due to the constraints of a body filled with dying bone.
When I arrived at the event, I went straight to registration, I explained I had been watching online and noticed it was open to the public so I had come in person instead.  The lovely ONC staffer explained the main ballroom was registered to a point of near capacity.
Thus… no non-essential people had been invited.
That rang a bit in my ears.  Non-essential.  I looked around for other patient speakers who were in attendance and did not see them.  I saw a lot of venders, providers, governmental employees, and public relations folk from Ketchum, but I did not see a lot of patients.
So, I wandered over to the Grantee Consumer e-Health: “Take the Pledge” booth.  My friend Cindy Throop was sitting there.  She was manning the station as a favor but would have to leave soon and asked if I would like to help.  So for the next few hours I asked every passerby from data holding organizations to sign an online pledge stating: “We pledge to make it easier for individuals and their caregivers to have secure, timely, and electronic access to their health information. We further encourage individuals to use this information to improve their health and their care.”  Or if they were non-data holders the pledge stated: “We pledge to engage and empower individuals to be partners in their health through information technology.” 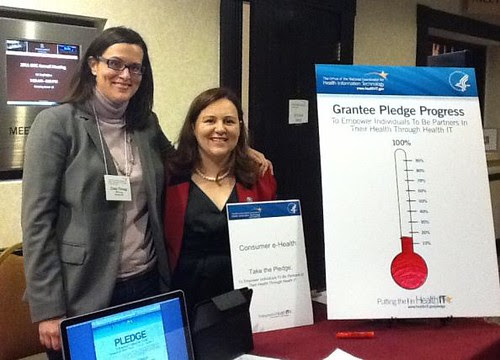 During that time I met a lot of great people and quite a few took the pledge. 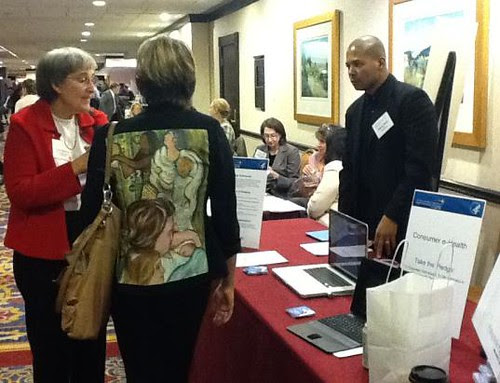 I saw other Walkers from the Walking Gallery.  Ted Eytan, MD from Kaiser was wearing his jacket, as was Lygeia Ricciardi, Senior Policy Advisor for Consumer e-Health, ONC.  I also met in person an amazing Twitter voice @BangorBeacon aka Andrea Littlefield. 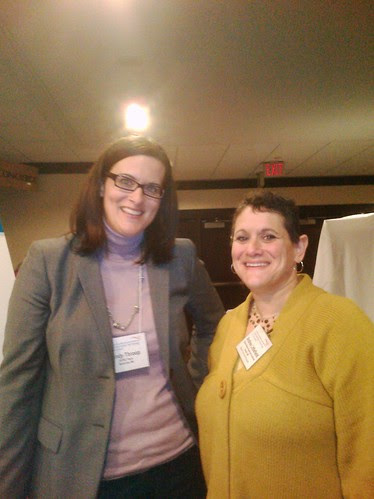 Later in the afternoon someone came over who had taken the pledge and wanted to know next steps.  I said the ONC would be contacting people shortly, but there was nothing stopping them from actively applying the oath within their organizations and personal life.
I explained I may be just an artist and patient advocate, but I was already living the pledge.
Hence, there is a Sycamore that upholds Alex in this painting. This is the lowly fig Sycamore.  The fruit of this tree historically was fed to only pigs and the poor.  It wasn’t fit for climbing.  But sometimes when you so desperately want to see, desperately want to help, you are willing to suffer extreme discomfort and public ridicule just to view the promise of new tomorrow.
And as I spoke to the grantee, I was no longer frustrated by being considered non-essential in the downtown meeting.  For the ONC had done so much to include thousands of patients in the online webcast and Twitter stream whilst those patients could sit in the privacy of their homes.  They included people who, like Alex, are recovering from surgery so far away.
They included people who could not climb trees.
It seemed as though the ONC folks were singing to me through a pledge. “I am coming to your house today! I am coming to your house to stay!”
I am sad that Alex could not walk with the Gallery in June or in September.  I am sad she may not walk in months to come.  But the Gallery has deep roots, and we shall walk for her.  Every time one of the Gallery members walk, they represent us all.  What a mighty weight that is.  We wear tragedy upon our backs.  We may bend and stoop with the weight of sorrow, but we shall bear it together. 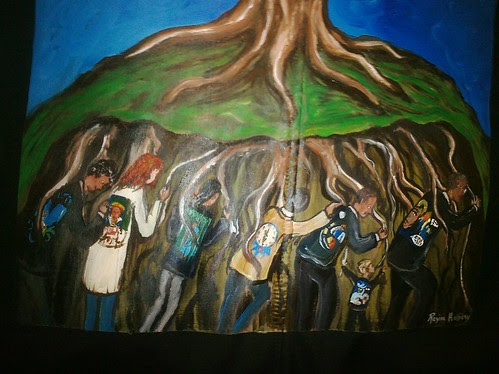 Do you know what a Sycamore is?  It is a Planetree:  a tree that Hippocrates sat beneath, the tree that Zacchaeus climbed upon and a symbol of another way of practicing medicine.
Welcome, Alex on your tree, Welcome to The Walking Gallery.
Posted by Regina Holliday at 7:40 AM